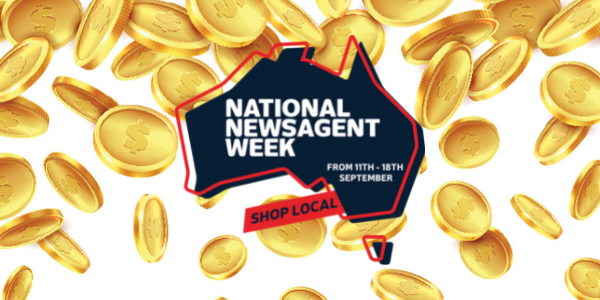 With newsagents across Australia continuing to stay open and support local communities in these trying times, magazine publishers are pleased to announce an in-store promotion to support them with cash prizes for both consumers and newsagents through National Newsagent Week 2021 (11-18th September 2021).

Newsagents have proved once again to be resilient in the face of Covid, continuing to trade as essential services throughout lockdowns, and support their local communities. In turn, the communities have embraced local shopping, with newsagents leading the trend.

For the third-year now, magazine publishers including Are Media, Next Media, NewsLifeMedia, Lovatt’s Media, DC Thompson, Genera, Just Media, Marketforce, Puzzler Media Australia, Seymour, Universal Media and Yaffa Media have joined forces to launch an initiative to give back to newsagents and the community, to show their appreciation of the role newsagents play in Australia’s local communities.

Working in conjunction with Ovato Retail Distribution and Ovato Print for magazine distribution, and the national peak body for newsagents, the Australian Lottery and Newsagents Association (ALNA), the publishing industry is offering customers who purchase a magazine at any newsagent between 6 September and 3 October the chance to enter a draw and win $50,000 with a guaranteed prize of $5,000 – visit  nationalnewsagentweek.com.au

The promotion is being supported with in-store displays, social media and advertising across national and metro magazines and newspapers.  If consumers have not done so already, now is the time to step back into these newsagents to see how quickly and safely they can access a diversity of essential products on offer.

Ben Kearney, CEO of Australian Lottery and Newsagents Association, said, “Consumers have made it clear that newsagents are their preferred outlet for buying magazines. And we have seen that the escapism and insights provided by magazines has been particularly in demand throughout the challenges of the pandemic.

“We’re so pleased to have the nation’s leading publishers joining together in support of newsagents and their local communities. As shoppers are driven to stay confined in their local areas and are encouraged to support small business, newsagents have been enduring and primary point of sale for many and varied products and services, including magazines.”